Magician and illusionist Dynamo performed tricks for hundreds of people in the Old Market Square yesterday. SIMON WILSON had a private audience with the star who’ll be back in December on his debut tour with five shows at the Capital FM Arena 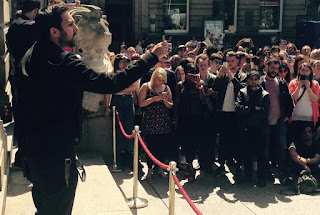 IT was his first time in the city, not just as a performer but ever.
Dynamo came to Nottingham yesterday to show a few of his magic tricks on the steps of the Council House in front of around 500 people,
It was a publicity stunt to promote his five shows at the Capital FM Arena in December, part of his first UK tour.
The 32-year-old, whose Magician Impossible TV series has been sold to over 180 countries, did a 20-minute show for free, including card tricks, predicting Lotto numbers and turning Lotto tickets into cash.
“I can’t do street magic so much these days since the success of the TV shows because it can be chaotic,” he said before the “Dynamo flashmob”, as he called it.
“That can be fun for me but it makes my management nervous.”
Indeed, it was they who asked the Post to remove the time he was due in the Old Market Square for fear there being an unmanageable crowd.

Dynamo, real name Steven Frayne, developed his organic style of magic growing up in Bradford.
“I’m like a Ninja,” he laughed.
“I use the surroundings; I borrow things from people, like mobile phones. I’ve always been like that because when I was a kid I didn’t have the luxury of being able to go to magic shops and getting the props you’d traditionally see a magician use. It was whatever I could find; a teacup or whatever.
“Because of that I feel like I can perform anywhere.”
He added: “The first time I put a phone in a bottle was in a pub. Up until then I was putting a coin in a bottle until this bloke asked ‘Can you do my phone?’ I tried it and it worked. And I thought ‘that’s a keeper’.”
The tour, called Seeing Is Believing, will include illusions on a larger scale, while maintaining his love of close-up magic. 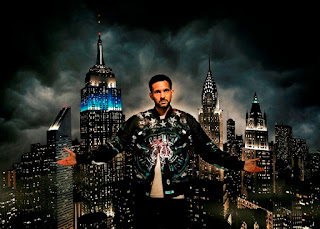 “I am a close-up performer at heart but I’ve been working on making what I do play bigger. Even though I’m in a big arena I don’t want to lose the essence of what people like about what I do; the Dynamo style, for want of a better expression.
“It wouldn’t work me coming out with fancy boxes and putting women inside them.”
He added: “Like any of my TV shows it’s going have moments of drama, there’ll be peaks and troughs. It won’t just be a series of tricks.
“I want to create moments of magic for everyone so interactivity will be a big part of it. The audience will be involved in it to help create the magic.”
Dynamo grew up with a dad in prison and teenage mum, who was just 16 when he was born. It was his late grandad, Ken, who taught him magic, initially as a way to fend off the bullies.
“He would do magic but it was more stuff you’d do down the pub to get a free drink. He was in World War II and after that things were still tough so he’d blag as many free things as possible by doing magic.”
Added Dynamo, who was diagnosed with Crohn’s disease at 13: “He managed to blag my grandma’s heart and he did all right there. She put him on the straight and narrow.”
He lost his grandad three years ago, but the skills he passed on have made Dynamo a worldwide star.
He now lives in Hampstead with wife Kelly and a dog called Bessie.
“We go to indie gigs quite a bit and I like stunt driving,” he said of his favourite downtime pursuits.
“I dream of being a stunt driving in films, like James Bond.”
One imagines his management would have something to say about that.
Before we finished up and he made his way to the Old Market Square, he had a thought. 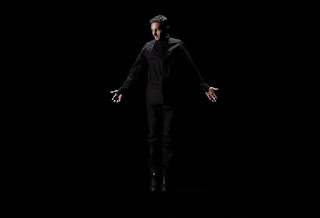 “Actually, I have been to Nottingham. I was at Center Parcs in Sherwood Forest at Christmas with my family. As a kid I always dreamed of going there but it was always out of our reach. So I decided to take the whole family. I didn’t see Robin Hood though.”

Email ThisBlogThis!Share to TwitterShare to FacebookShare to Pinterest
Labels: 2015