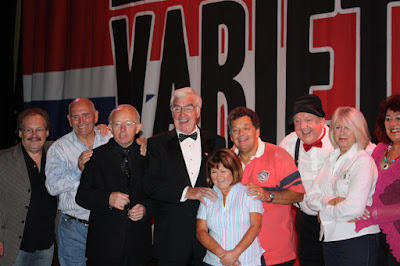 Carson with the rest of the 'Best Of British Variety Tour'


EVERYTHING is an opportunity for a gag.
Unlike his late mate Bernard Manning, who would often resort to insecure boasting and sentimentality during his last interviews with EG, Frank Carson is relentlessly in search of the joke.
"Just before he died I rang him up and he said 'I'm on iron tablets'. I said 'I know' and he said 'How did you know?. I said 'Because every time I looked at you, you were facing North'."
Does he miss him?
"Everybody misses Bernard. The one thing I loved about him was, when he did the show after he was dead, do you remember that?"
Yes. It was a pre-recorded epitaph, Manning commentating on his own funeral for a TV documentary.
"He said 'bury me in a sound-proof coffin. I don't want to hear that b*****d Carson telling jokes!'"
You wouldn't pre-record your own epitaph for TV.
"No I don't think so. It wouldn't be nice. Bernard was a one-off."
He also spoke at the funeral of Mike Reid, the 70s comic and EastEnders actor who died not long after Manning last summer.
"I said: 'You've been a wonderful man, Mike, all your life, you've filled millions of homes with glee, comedian, singer, actor... but you were never as funny as me," he laughs.
"He would have loved that.
"He's was a great friend," he adds, his voice cracking just a little.
Carson, Manning and Reid were all graduates of the working men's clubs of the North who found fame on the 70s TV show The Comedians.
And Carson, who is 82 in November, is likely to go the same way as his buddies – working until he drops.
"People say 'why don't you retire?'. But everyone loves a laugh and I make them laugh," he says simply.
But what about the heart attacks?
"I don't know where that came from. I've never had a heart attack. What I had was a pacemaker. When I fart the garage doors opens."
He's off again.
Unlike Manning, who never cared about his bulk, Carson has shed three-and-a-half stone in the past few years.
"It was so easy I can't believe it."
How did he do it?
"Porridge."
You just ate porridge?
"No. You get a half pint of water and fill it full of porridge. There's no way you're going to eat all that I promise you. And I ate one meal at six o'clock. The weight just fell off.
"But you must not drink," he warns.
"You must give up the liquor. It's a terrible way to go through life not to have a nice pint of lager, or a glass of wine... it doesn't matter if it's red or white to me because I'm colour blind."
Carson will be going into hospital next Friday, the day after he's in Nottingham.
"Just for a couple of hours," he says.
"They're going to recharge my heart. The pacemaker's not pumping at the pace my heart is going at."
It'll be Bobby Ball ("a great friend") – his fellow performer on The Best Of British Variety Tour which comes to the Royal Concert Hall on Thursday – at his side for the appointment.
Cannon & Ball, The Krankies, Jimmy Cricket, Paul Daniels and the Brotherhood Of Man and Frank Carson kicked off the tour last month in Skeggy, trawled the usual end-of-pier venues before moving inland to cities and towns where this sort of pre-alternative comedy hasn't been seen outside social clubs in decades.
But many of the dates have sold out.
"It's a revelation to a lot of people in showbusiness," says Carson, who is the compere.
"That here's something that the general public want to see. It amazed me," he admits.
"At the start I thought it might be rather difficult to get people to come in to see a show with all oldies like us. I'm thrilled to bits."
Jimmy ("There's more") Cricket is the youngest of the crew at 62. Carson is the eldest. The combined ages of all the performers circles 700 years.
"None of us are using make-up but Readymix."
He's sounding older than the last time EG caught up with him three years ago when he was at Cabaret in Fletcher Gate. But he's still non-stop.
"Spike Milligan said 'what's the difference between Frank Carson and the M1?' You can turn off the M1," he laughs.
"Bobby (Ball) calls me Rebel Without A Pause."
Behind the Irishman's barmy exterior is a life-long charity worker. Which sounds a like a cliché but it's earned Carson the Roman Catholic Church's highest honour -- Knight of the Order of St. Gregory The Great.
"On the 20th May 1987 in the Vatican in the private room of John Paul II, who will in the next couple of years be canonised as a saint," he says proudly.
"It was lovely having my grandchild dangling in his arms, me shaking his hand – it was a great honour. But I don't use the title Frank Carson KSG."
There are just seven of his kind in the UK, he says.
"I have the full papal uniform that goes with it. It's worth £2,500. If the Pope came to this country I can precede him to the altar with a drawn sword as his bodyguard."
Wait for it...
"But I tell people it means that when I go to the Vatican I can use the Pope's washing machine. And get one of the nuns to give me a haircut."