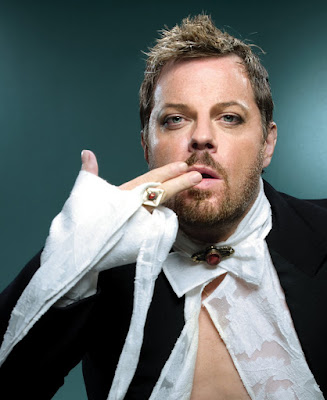 IF there was a God then he’d have flicked Hitler’s head off.
Noah’s idea of the animals - two by two, the Ark and all that... doesn’t really work with the lions and the tigers does it? Like putting four students on a boat with Pringles.
Dinosaurs didn’t rule the earth - they spent 165 million years growling at and killing each other. Rubbish.
Oh and why did your mum stop you eating cake mix so she could put it in the oven and make it less good?
There’s something about feral Scrabble, Ninja sheep, Sarah Palin and ants in giraffe’s clothing...
It’s the same show that Eddie Izzard has just taken across the US. The same show that played to 18,000 people over three nights in New York.
The same - be it with a few tweaks -- that the Valkyrie actor will bring to the Trent FM Arena for two nights in October.
And here we are, just 220 of us, in Lakeside’s Djanogly Theatre, late on a Tuesday night. And late means a 10.45pm start.
As a result, the subtle asides, so typical of Izzard’s rambling style, do get lost as the clock edges to midnight. Something about The Owl And The Pussycat, about Shirley Temple and exactly why is he singing “She’ll be coming round the mountain...”?
But in the main it works. Most, I’m sure, are just enjoying how special this gig is. There’s only one woman who is over-excited and tries to interject early on but she settles down. And while interaction with us is minimal, there are laughs aplenty.
The appendix line -- “designed to deal with grass, but we don’t eat grass, asparagus isn’t the same thing... oh just stick me in the back of a book then” is a howler, more so for the split second it takes for the penny to drop.
There is a point to Izzard’s comedy. Creationism vs. evolution. The Bible vs. Darwin. But it’s no lecture.
Dressed in jeans and a shirt -- “off duty” says the transvestite -- he leads us through the Stone Age, Romans, Egyptians and Greeks, and delights in wordplay: “So you see, badgers CAN be choosers.”
Early evening he was at the University of Nottingham with Alistair Campbell in a discussion with students about politics. This 90 minute gig wasn’t so much a warm-up for his arena tour as something “fun” to do after, so he told me yesterday.
Indeed it was fun, be it a battle to keep the brain engaged so late on a school night.