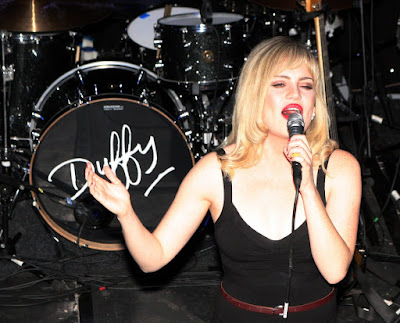 WHILE the Christmas lights were coming on in the Old Market Square, the alarms were going off at Jongleurs.
It was this that delayed the arrival of Duffy for her 'secret' gig, as the Castle Wharf club was evacuated.
It was, admitted the Welsh diva, the result of her burning incense in her dressing room.
"At first they thought it was because I was smoking," she quipped.
The 50-minute set, part of Trent FM's Live At The Local annual gig, steadily gathered pace as she ran through most of her debut No.1 album Rockferry.
She was comfortable opening softly, with a gospel song accompanied only by her guitarist. The title track was the first song familiar to the casual Duffy fan and prompted the odd sway n singalong.
But what was apparent far too early was the noise from the crowd. The 400 or so competition winners, who'd been given free access to an intimate audience with a singer who'll be on tour from next week playing venues the size of the Royal Concert Hall, seemed otherwise engaged. Chatting with each other as if they were, indeed, down their local with the inconvenience of a live band in the corner.
They'd closed the bar to keep levels down during her set but it had little effect.
She began to tell the story of how the hit Stepping Stone came about but was drowned out by some yawping females. I couldn't make out what was said exactly but Duffy responded by assuring them that despite the Dusty Springfield comparisons she wasn't "a lesbian" – and they'd have "to fight amongst yourselves."
And those that weren't talking were watching the gig through their mobile phones.
Baffling.
It was a shame as Duffy is a real talent, able to effortlessly handle the shift from seductive jazz (Hanging On Too Long) to 60s soul (Mercy) and tormented ballads (Breaking My Own Heart, a taster from her next album).
She and her six-piece band seemed to be enjoying themselves at least, grinning throughout, joking about her pleasure in the fireman's lift out of the venue during the evacuation and a past gig in Nottingham that she had to play by candlelight.
Maybe being in a comedy club had lightened her spirits. and it has to be said, it's a great venue for live music.
But there's something to be said for charging an audience to see a show. At least if they've committed with their cash they'll pay more attention.
Posted by Simon Wilson at 06:49