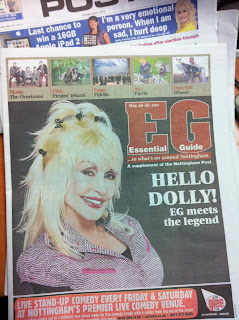 
IT is quite an image: a wig-less Dolly Parton wearing an apron and rubber gloves attacking a sink full of dirty pots. According to the multi-millionaire singer, actress, entrepreneur and literacy champion, that’s exactly what she does back home in Tennessee.
“I like taking care of my own things,” says the 65-year-old, in a plush hotel room at London’s swanky Savoy Hotel.
“I don’t have maids and servants, just a group of people who come in to clean my house once a week, to mow the lawn, clean the yard and do the heavy cleaning. But my husband and I do our own stuff. I wash my own dishes and cook my own food.”
Although the Queen of Country does have her limits.
“My husband puts the garbage out,” she giggles.
She adopts the same principle when she’s on tour. When the Dolly circus rolls in to Nottingham this summer on the Brighter Day Tour, don’t expect to see her checking in to the Lace Market Hotel.
“I live in my bus. I have it all set up with washers, driers, refrigerators, kitchens and I can cook. I live in there. It’s easier. You don’t have to put up with going in and out of the lobbies, people coming into your room looking at your dirty drawers and your pantyhose hanging up!”
Dolly is in London to promote the tour. In a room on the seventh floor of the Savoy Hotel she appears, dressed in black leather trousers, a sparkling red and blue jacket and black high heels. It’s a Barbie doll look she cultivated as a child.
“I was always fascinated with the town tramp. I didn’t know that’s what she was but she was the prettiest thing I’d ever seen. That’s how I wanted to look when I grew up.”
As she has got older the wigs have become an integral part of the Dolly look.
“I wear wigs all the time,” she admits.
“I have a girl who does all my wigs, so I never have a bad hair day. I keep my own hair the same length and colour and I fix it myself when I’m at home. But I wear wigs when I’m out in public.”
Who gets to see her without the wigs and make-up? 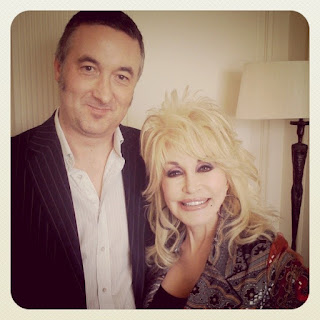 “My husband and my friend Judy and my sisters, if I’m sick or something. But even when I’m sick and I can’t do it myself I’ll ask my sisters to put on some lipstick. I’ll never go out in public without my make-up. Somebody’s going to see you and be so disappointed.’Oh my God, I saw Dolly Parton and she looked like hell!’
“I’ve always said, if my husband was having a heart attack it would probably be the only time I’d go out without make-up. And even then I’d have to think about that.”
Dolly makes no secret of the nips and tucks she’s had over the years to defy the ageing process and in the flesh it seems to be money well spent. The plastic appearance on TV isn’t apparent up close. She looks good for an old gal. And her personality couldn’t be brighter. Although she does, now and again, open up.
I wonder if she ever loses her temper and wants to kick a puppy?
“Oh sure. Nobody’s happy all the time,” she says.
“I’m a very emotional person. When I am sad, I hurt deep. I’m just one of those people that if it’s something to eat I’m going to eat the whole thing, If I’m going to be in love I’m going to love you all the way and if my heart’s broken, it’s just shattered all to pieces.
“I work hard at trying to get up out of it sooner than most people do but I hurt and I cry.”
When was the last time and why?
“Actually that was this morning on a TV show when they showed some little kids reading and they were saying ‘I love you, Dolly’. It doesn’t take much to make me cry. I cry when bad things are happening to my family. I have a sister going through a really hard time with possibly even a divorce. She’s so broke up and it kills me to see her hurt.”
Dolly is the fourth of 12 children born on a farm in the poor East Tennessee hills. Her career was kick-started when, at the age of 14, Johnny Cash saw her perform at the Grand Old Opry in Nashville and encouraged her to pursue a singing career.
Since then there have been millions of albums and singles sold across the world, including Jolene, Islands In The Stream, Coat Of Many Colours, Here You Come Again, 9 to 5 and I Will Always Love You, which topped the US chart three times.
As an actress she’s appeared in Nine to Five, The Best Little Whorehouse in Texas, Steel Magnolias and The Beverly Hillbillies. But she’s also a canny businesswoman, owning everything from TV/film production companies to the Dollywood theme park and Splash Country water park, a wig makers and a restaurant chain.
“I think of myself as a working girl, not a star or celebrity,” she says.
“And I love my life. I would not bitch about it.”
A lot of celebrities do.
“Yes they do but they don’t deserve it. The don’t deserve the fame or the money they make from these fans that they’re running away from. That’s how I feel. There are some people who just absolutely hate fans. I think they’re not happy, they can’t be happy in their own lives.”
She adds: “It gets on my nerves every now and then. You can’t be up all the time but I know everyone is just making a living, like the paparazzi. They’ve got to feed their families too.”
Her positivity seeps through each track on her forthcoming album, Better Day, due out July 1.
“All the songs are positive and uplifting. There are a couple of sad songs about losing but I’m saying I’m going to pick up these pieces, clean up this mess and be better than ever.”
She adds: “I think with the economy and all the craziness going on in the world, I thought it would be a good time to have some songs that were more uplifting.”
Her last album, Backwoods Barbie and the tour which prompted her first visit to Nottingham in 2008, was considered to be her first pure country album in 17 years. This time, she says, it’s more country and pop.
“I write everywhere. I keep a notepad and a little tape recorder by the bathtub and wherever I’m at because things come to my mind and I’m afraid I’ll forget it. I’ll dream stuff too. Although it’ll be better in my dream than when I write it down. But almost every day I’ll write an idea. It’s something I’ve been doing all my life.”
For Nottingham fans, the visit three years was expected to be her first and last to the city.
“But the fans kept saying you’ve got to come back and I said you’re right, we do,” she laughs.
As well as the album and tour, there are plans to bring her stage musical, 9 To 5, to the UK.
“I’m also writing my life story as a musical. I’m also planning to write a movie of my life but the musical is what I’m most excited about. You can tell more truths.”
Retirement isn’t on the cards.
“I could but what would I do? I love to make things happen. So I’ll be at it until I keel over.”
Dolly Parton plays the Capital FM Arena, Nottingham August 22, 2011. For tickets visit www.livenation.co.uk
Posted by Simon Wilson at 15:01