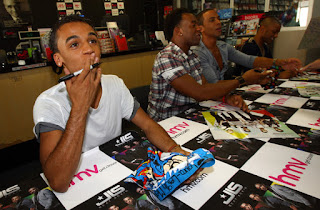 
POSTERS, T-shirts, teddy bears, badges and keyrings I get but condoms?
Walk in to Boots and you’ll find a rack of them baring the faces of all four members of boy band JLS.
No doubt there’s a serious message behind the idea but let’s ignore that. Has Aston stuck one of Oritse’s branded condoms on his head and blown it up with his nose? Yes I know, childish but I saw someone do that on holiday years back and it was very funny.
“I leave Oritse’s condoms to him,” laughs Aston Merrygold, the shortest member of Britain’s biggest boy band.
“Besides I did two of my own,” he adds, before toning down the silliness to deliver the all-important message.
“It’s not weird at all. It’s to create a sexual awareness message, you know. People in this country are not, you know, by the stats, being careful enough with their sexual health. One in five girls fall pregnant before they’re 18.
“And last year alone there were over 500,000 cases of STDs in the 16 to 24 year old bracket. Our fans are mainly that age group, so it’s just trying to raise awareness.”
Aston isn’t just reading off a press release handed to him by his manager. The idea to get behind the project came from his mum, who works with young mums and young families.
His dad on the other hand is a supply teacher.
“My dad lives up in Nottingham,” says Aston.
“He moved up there when I was about nine or ten.”
That was when his parents separated. Aston stayed with his mum in Peterborough.
“When we come to Nottingham I’ll see him and my uncles but it’s been quite a while since I’ve been able to do that because we’ve been darting around the country.”
He adds: “I’ve got a couple of friends who go to university in Nottingham as well. When we did the club tour about two years ago, the Nottingham crowd came down for that and we had a good time.”
Since then they’ve sold out the Royal Concert Hall and next month return for the first of three shows at the Trent FM Arena.
“It’s a scary thing to think that two years on from doing the X Factor Tour that people are coming just to see JLS now.”
Scary but hardly surprising. They’ve so far racked up three No. 1 singles, a No. 1 album and won two Brit Awards.
“We’re going all out with the stage production on this tour, “ he promises.
“There’s going to be stuff you’ve never seen before on a tour. Our creative director has been to see hundreds of shows over the past year just to get ideas and to see if anything can be pushed to the limits. Can people fly around the stage without the wires? It’s going to be like a movie on the stage.”
Along with condoms, JLS have attached their name to Nintendo’s Christmas campaign. There’s no serious message behind that.
“Obviously it’s a load of fun. Have you ever played Mario Kart on the Nintendo Wii?”
Nope. I’m 43 years old.
“I tell you what, play Mario Kart, get your friends together, some drinks and a take-away... it’s one of the best things I’ve ever experienced.
“It’s a regular thing now at the weekend, with my friends. Before we go out., it’s Mario Kart and dinner.”
The lead single from the new album, Outta This World, which is released next week, is the Children In Need song Love You More.
“It’s a fantastic honour to be involved in that charity because it does so much good for the kids in this country,” says Aston.
“The song is extra special for us because it’s the first one we wrote together.”
For the album they worked with “some crazy producers”, he says.
“Guys who have done some amazing stuff with Ne-Yo and Rihanna and Beyonce and Fergie. It’s not a total style shift from the first album but I think it’s more universal. I think it’s going to be liked all around instead of by just one audience.”
Apart from Mario Kart what else does he do for laugh?
“I do love a night out with the boys or with friends who I’ve had since I was at school. We’re all still lads and enjoy chatting up the prettiest women in the club.”
Gig
Who: JLS
Where: Trent FM Arena
When: Dec 11, Jan 11, Jan 23
Tickets: £25.54 to £31.67, 08444 124624.
Web: www.trentfmarena.com
Posted by Simon Wilson at 14:16