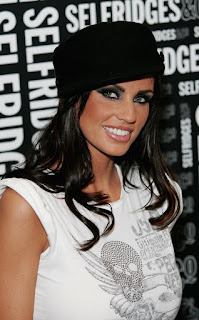 July 2010
OK, the rules: Don’t ask her about her relationships with Andre or new hubby Alex thingy. Suits me duck. I couldn’t care less.
No-one said the interviewer couldn’t be idiotic.
Katie...
“Who’s that?”
It’s me.
“It’s me,” she mimics.
It’s your dream man.
She laughs awkwardly, then sighs: “Simon.”
Well, there you go. (Yes, she was probably looking at her interview schedule but, you know).
What Katie Price will talk about is her latest novel, Paradise, and -- and this is why she’s been doing press and TV interviews since 7am -- her new single, Free To Love Again.
The title is a shoe-in for breaking those rules, as it implies her debut solo single is based on her split from Andre.
“I didn’t write the song at all. I had no influence on it apart from putting my vocal on it.”
I know. That was Mike Rose, who wrote for and/or produced Kylie, East 17 and S Club 7.
Rose had seen her on I’m A Celebrity... and approached her people with the idea of recording it.
“Everyone was hesitant because I’m not a singer,” she admits.
“That’s not what I do even though I done a charity album (A Whole New World, with Andre) and I done Eurovision...”
Not quite Eurovision. She came second to Javine in the UK heats in 2005, notorious for her performance wearing a skin-tight latex pink catsuit whilst heavily pregnant.
“When (Rose) played it to me I thought ‘oh my God, I love this song but the test will be if I can put a good vocal down’. Luckily it was my range. So, three weeks ago, at my house, I put down the vocal.”
Three weeks, that’s a quick turnaround.
“Well, there’s no point promoting it for months in advance. People do that because they want to get radio play. No radio is going to play my song because it’s not credible to them.”
Are they not playing it?
“I dunno. I’m not even going to give anyone the chance to reject it.”
I bet some journalists have assumed Free To Love Again is about Andre?
“Oh,” she sighs, “I’ve heard it all today. They’ve all tried different angles and the answer is no, it’s not about the ex.”
Well, let’s give her a break and try something she won’t have been asked today. What is the capital of Hungary?
“The capital of Hungary? My geography, you’re asking me... I’m only trained when it comes to the product of Katie Price. Anything else I have no idea,” she laughs.
It’s the sort of attitude that has made her millions. The new single is unlikely to make her another though. And she knows it. It’s not the beginning of a pop career for the 32-year-old mother-of-three.
“Not at all but you know, if something happens from it then great.”
Say it gets to No. 1...
“I don’t think it will. I haven’t had enough promotion for it.”
What if you’re offered an album?
“I wouldn’t turn down doing an album, of course I wouldn’t, because I love singing but it would have to fit in with everything else that I’m doing.”
She adds, with a waver of her voice: “I do genuinely like the track, I’m not lying, I wouldn’t do it otherwise.”
Were you belching or yawning just then?
“I’ve been eating, what they called?... Wasabi Nuts. I’ve been munching on them.”
And not the testicles of a kangaroo...
“Exactly.”
Released this week via download only, Free To Love Again is a dancey, jolly number that may be a child’s very first music purchase.
“You know, you’re the first person that’s said that and that’s probably quite true. Mine was Kylie Minogue: I Should Be So Lucky.”
She describes her effort as “not bad.”
Adds Price: “I chirped out a little song - cheep cheep like a budgie.”
What do her three children listen to?
“Princess listens to anything. Junior likes Jedward and Harvey loves Ne-Yo, Usher and Rihanna’s Umbrella. And if you put anything else on he goes nuts. When I’m in the car, he turns the volume up really loud then puts his fingers in his ears. So people are probably thinking ‘why has she got it so loud that he has to put his fingers in his ears?’”
Free To Love Again is available to download from iTunes, Amazon and Play.com
Posted by Simon Wilson at 09:29