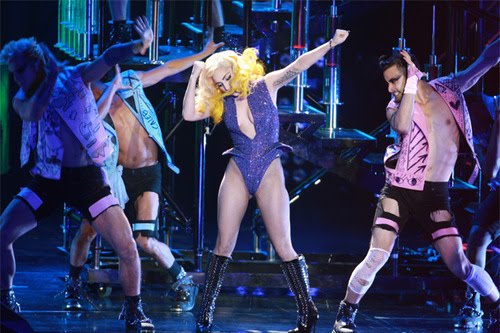 May 2010
MAVERICK, mannequin or just another Madonna?
To be honest, I’m with Christina Aguilera.
When asked about Lady Gaga, she said: “I think she's really fun to look at.”
It was a dismissive remark that our Aggers insists wasn’t meant to be a criticism. This week she responded to talk of a brewing feud by saying “I have absolutely nothing against Lady Gaga. I think she is great.”
But the column inches dedicated to the flamboyant singer, whose career is barely in to its second year, seem to outweigh the success of her music.
There have been the singles Just Dance, Poker Face, Paparazzi, Telephone and Bad Romance and the album, The Fame. Yes, The Fame Monster followed as a second studio release but it was originally intended as a reissue package of the debut with eight extra tracks. Not quite the follow up in the traditional sense. Then, just this month she released The Remix, essentially a collection of, erm, remixes.
Her presence in the gossip columns over the past year seems to outweigh such success.
And it’s not only been for the bonkers outfits that have included a lobster hat and Bridget Jones-style big knickers that, apparently, prompted a rush on sales. But for excessive cocaine use that she believed would kill her; stripping on stage in New York club; asking Boy George to sign her body; and discussing her bisexuality.
This week MTV has reported that she is to design a range of condoms. And The Sun reckons she’s been learning to speak “like the Queen” to impress fans in the UK.
Then again, isn’t she the perfect pop star? Don’t we prefer them to extraordinary? I’d swap a dozen Leonas or Alexandras for half a Gaga any day.
George Michael is fan: “Lady Gaga has my full attention,” he said.
“She’s a very original songwriter with quite a unique overall package.”
As is Rihanna: “I have so much respect for original artists who aren’t afraid to do what they want to do. She’s awesome.”
Madonna has yet to comment. Her take will be the most interesting as many see Lady Gaga as an heir apparent.
“I don't see myself as an heir,” Gaga told the LA Times.
“There is nobody like me,” she adds - but with a twist.
“That is a statement I want every woman to feel and make about themselves.”
So, if she’s not the new Madonna, then who is she?
Born Stefani Germanotta to middle class Italian American parents in New York, she attended a private Roman Catholic school.
“I used to get made fun of for being either too provocative or too eccentric, so I started to tone it down,” she told one interviewer.
“I didn’t fit in, and I felt like a freak.”
By the age of 14 she was performing at open mic nights in the city. Three years later she enrolled on a music course at a prestigious arts school but she quit after a year, moved in to a rented flat - paid for by her father - and immersed herself in the local rock scene.
At 19 Germanotta signed to the Def Jam label, was introduced to songwriter and producer RedOne, recorded Boys Boys Boys (a mash-up inspired by Mötley Crüe's Girls, Girls, Girls and AC/DC's T.N.T.) but nothing came of it. Or the Stefani Germanotta Band, which she started with friends.
It was music producer Rob Fusari who gave her both a step up and the name Lady Gaga.
He says: “When Stef came to the studio, instead of saying hello, I would start singing (Queen’s) Radio Ga Ga. That was her entrance song.”
It was while sending her a text that “radio” was changed by predictive text to “lady”. That’s his story of how the legend of Lady Gaga was born.
Within 12 months she was writing her debut album.
Despite the dominant image as a mannequin for leftfield designers, the 24-year-old has substance as a songwriter.
Prior to hitting a single headline she had written tracks that would be recorded by Britney Spears, New Kids on the Block, Fergie and the Pussycat Dolls.
It was supporting PCD on tour last January that resulted in her Nottingham debut, playing a 20 minute set at the arena.
Her arrival next week will be greeted with more of a fanfare.
For starters the show is sold out.
Since playing Nottingham she has sold 11 million albums, broken records for download sales and won Grammy, Brit and numerous other awards.
Just last month she, along with fellow pop divas such as Cheryl Cole and La Roux, was cited as key to a resurgence of the pop single. During 2009, pop singles accounted for a 33.5% share of total sales, unseating rock as the most popular music genre.
This month’s Time magazine has included her in its annual list of the one hundred most influential people in the world.
Yes she’s a maverick and a mannequin -- and Madonna must be terrified.
Gig
Who: Lady Gaga, Alphabeat
Where: Trent FM Arena
When: Thursday, 7.30pm
Tickets: £30/£27.50 (returns only), 08444 124624
Posted by Simon Wilson at 05:33