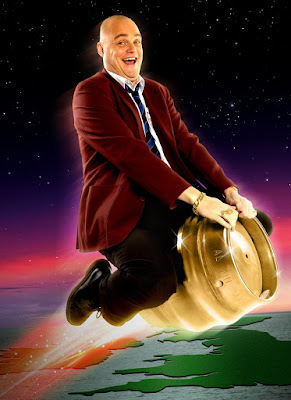 ANDREW will remember the last time Al Murray came to town.
He was the poor chap who had The Pub Landlord inches from his face repeatedly screaming "Where's the ******* money?"
He'd admitted that he was actually a financial adviser, you see.
It's an integral part of Murray's show to banter with the crowd and on this particular night Trevor, Stella, Simon, Marina, Amber, Anthony and fuzzy-haired Tom had all been subjected to his barracking.
But Andrew came in for special treatment, with the giant comic clambering over seats to hold him responsible for the credit crunch.
And don't think you'll be safe when he's on a bigger stage next week, making his debut at the Trent FM Arena, where he plans to "bug the security staff" by wading into the crowd.
"Sometimes but generally people get into the spirit of it," says Murray, when I ask if anyone has ever reacted angrily or started crying.
One of the reasons he is one of Britain's best stand-ups is because of this ability to riff off a crowd. It's something the Hell's Kitchen winner finds is a doddle.
"I've been doing this for 15 years, so the spontaneity comes easy. The chances are I've been in the situation before. I don't know who the people are but I can always move on to someone else if the situation's not working out."
Isn't he surprised that when asked for their occupation, they admit to being, say, a tax officer or a banker or a student, knowing they'll get a hiding?
"Well it's part of the game, isn't it?" says Murray. "Everyone's in on it. They're in on the fun."
Not that it works every time. After our review of his February date appeared online, one punter commented: "I for one will not go to see Al Murray again, I found him to be a bit of a bore who doesn't know when a joke stops being funny."
While he may have nearly 3,000 people in stitches, the few that don't enjoy it do get to him, he admits. "Any comedian will tell you, you can have a whole room laughing and there's one person with a sour face and you end up trying to make them laugh."
Murray was a regular at Just The Tonic Comedy Club when it was housed at the Old Vic, then Cabaret, in Fletcher Gate. He remembers it well.
"The room was a bit weird because the stage was in the middle and everyone is to your left or right. But it was always good fun to do."
Such has been the popularity of his shows that The Pub Landlord is opening up on arena stages. So how will the show differ from the one at the Royal Concert Hall? "We're putting screens in," he says simply. "The show is the same."
Although he's expanded his repertoire with a glut of new characters in the BBC sketch show Multiple Personality Disorder, he has no plans to put his patriotic pint puller to rest.
"Certainly not. It's just another thing I do. To be honest, it's a perfectly logical extension to the landlord. I'm a character comedian. Just because I'm having success with one character doesn't mean I can't do other things."
The idea of a tour for those characters, however, remains less clear.
"We've talked about it but there'd be a lot of hanging around while they're changing sets or I'm in make up. So I don't know. Stand-up travels light."
So how are the public reacting to the new characters. Have they been shouting out catch phrases in the street?
"Not yet. Well I haven't been out on the street much. I've been in the car or hotel rooms. I'm still waiting to find out."