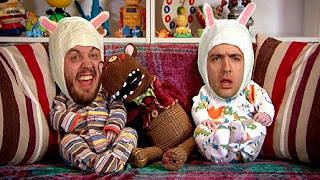 LESS than a year after heading for London to pursue a career in entertainment, Martin Collins is now taking baby steps in the world of television -- quite literally.
The 29-year-old from Bakersfield is a star of Big Babies, the new 13-part children’s TV series for the BBC.
The former advertising salesman plays Rocco. Or rather his face does, which is superimposed on to the body of a ten-month old baby.
“It’s an odd way to earn a living,” he laughed.
The show combines live action, puppetry and CGI and currently airs on the CBBC channel.
Said Martin: “Obviously we’re hoping it will be moved to BBC One at some point. Then I may be recognised in the street by children. As long as I’m wearing a romper suit, anyway.”
Rocco is dropped off each day at the house of another ten-month-old called Brooks, a cynical and jaded baby, played by Spencer Jones.
Brooks’ mum takes them out for excursions in their double buggy. Trips to the park, the duck pond, the pet shop, or even just a drive in the car all provide the backdrop to a series of adventures.
The programme is a collaboration between CBBC and BBC Comedy, the first time the two departments have worked together.
“I met Spencer at Glastonbury,” said Martin, who used to play with Nottingham indie band Lo-Ego.
“We worked together on a comedy blog called Marts & Spencer, then last year we had three weeks in Europe filming new bands for PlayStation.”
Jones also writes the show, with director Jon Riche.
“They are the ones who put all the work in,” said Martin.
“They’ve been working on it for 18 months. I just turn up and pull a few faces.”
The trio also work together on a live comedy sketch show called Broken Biscuits, which they took to the Edinburgh Fringe last summer. The baby characters were created as part of that.
“We made a pilot of the sketch show for BBC3 which went online. Then CBBC liked the idea of the Big Babies. It’s ironic really because the sketch we had was the two babies discussing how rubbish kids TV was.”
He doesn’t have a baby of his own to inspire his performance.
“I was one though so I know how to behave like one,” he joked.
“It’s a case of trying out a few expressions and seeing how they work.”
He and Spencer follow a script in front of a green screen while watching the edited footage of the two babies.
“It's an insanely complicated process,” says producer Jack Cheshire.
“Everything has to be written twice, shot twice and edited twice before the VFX team can go to work on the finished cut.”
Martin, who also appeared in a TV ad for a Will Young album, now has an agent and spends much of the week auditioning.
“You do spend a lot of time at home. I have to be careful because my wife Kate monitors me on Facebook. She is the one bringing home the bacon and if she sees I’m spending a lot of time on there, she’ll be quick to send me a message: ‘The Hoovering needs doing!’
“Sometimes she treats me like I’m some sort of big kid.”
Big Babies is on CBBC, Monday to Thursday, at 5.45pm.
Posted by Simon Wilson at 08:42