Stephen Fry had the right idea when he said: “I just want to burn him at the stake and watch his witch’s heart babble”.
In the nicest possible way, of course.
Last night, Derren Brown, in the first of two sell-out shows at the Royal Concert Hall, proved again why he’s one of Britain’s greatest entertainers. Why he’d be one of the first people you’d want round at a dinner party. And why, in the middle ages, he’d have been atop a pile of twigs in the Old Market Square. 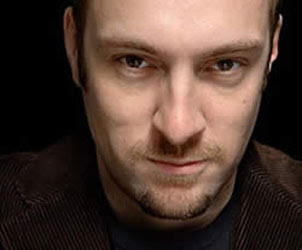 You can’t even begin to fathom how he does it.
Brown’s act is baffling, astonishing, awe-inspiring, brilliant. And yet he makes none of the claims of the so-called psychics, mediums and clairvoyants. Brown deconstructs some of the mystique surrounding his tricks but only in as much to encourage his audience that psychics, mediums and clairvoyants are charlatans.
Quite right.
He is an entertainer, who makes it clear there is nothing supernatural going on.
That said the way he can take just a few seconds to get an audience member in a trance or hypnotised or whatever it is he’s doing, seems non-human. The way he can connect the loose change in a guy’s pocket at the back of the stalls with another’s random scribblings while under his spell, beyond the logical.
And the finale, with the pictures and the numbers and the video... sheesh!
I can’t give the game away. It’s what makes it difficult reviewing a Derren Brown performance when 2600 people will be going to see the very same show tonight. To reveal too much will spoil the surprise. Sorry, surprises.
If you are going along tonight then expect a jaw-dropping experience, twists, turns, then more twists.
There’s the one with his grandfather's secret box. the one with the tambourine, bell and chalkboard, the Russian Cold War medium and the foil, the mind-reading, the video of his mum... and laughs aplenty.
Be prepared for a mass trance in the second half. And don’t be afraid that you’ll be marching down Queen Street barking like a dog. You can trust uncle Derren that no harm will come to you. No humiliation.
Having said that, I’m still with Stephen Fry.
Posted by Simon Wilson at 13:28