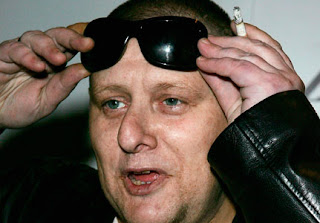 “IT’S a special guest thing,” says Madchester icon Shaun Ryder of the UK tour this autumn that will see him opening for The Charlatans.
“I’ve got a greatest hits album coming out in September and
I get to promote that.”
The album will features all the songs he wrote for Black Grape and the Happy Mondays. And then some...
“There’s the one I did with Russell Watson for the TV show Rock Star to Opera Star but I don’t think I’ll be doing that live,” he laughs.
Ryder also plans a new solo album for release early 2011, a collaboration with Sonny Levine, the son of legendary producer Quincy Jones.
Is it going to be completely different in tone to what we’ve had before from Ryder’s projects?
“Err, yeah.”
Shaun Ryder - the jazz album?
“Well, it’s pretty groovy.”
For the tour, Ryder will be with his band, which includes his nephew on drums.
“It’s basically the band I’ve had for the last five years.”
Does he know The Charlatans well?
“Well, we’ve bumped in to each other over the past 25 years.”
Where's Bez these days?
Kate England
“Actually I’m just reading the (Manchester) Evening News: ‘Happy Mondays’ Bez accused of girlfriend attack.’ He’s out on bail (laughs). I haven’t seen him for about a year. I don’t get on with his missus. As soon as he gets rid of this one we’ll be out for a bevvy.”
What has been the most wasted you’ve ever been on stage?
Nicola Monaghan
“From 1985 to 2004. I never did a gig straight until a couple of years ago. At first it was really frightening. Your self-conscious, especially when you’re old and moving about like mutton dressed as lamb. You think I’m 50 doing this. But you deal with it and get over it.”
Are you surprised that you’re still alive?
Phil Viles
“No, absolutely not. This is an easy gig compared to a lot of the kids I grew up with.”
What's the biggest rider (Ryder, geddit?) you’ve ever asked for at a venue?
Steve McGill
“I tell you what, it wasn’t me, it was Bez and hotels which cost about six grand a time. I don’t even drink the rider any more, I leave that to the young ‘uns in the band. I don’t really drink any more. Not when I’m in civie life. If I’m on the road I might have a couple but I don’t hit the shorts or anything.”
Aren’t pop stars boring these days?
Darrell Martin
“I don’t know. Yeah and no. There’s nothing clever about getting off your head. But it’s sort of looking like these days, to be in rock ‘n’ roll you need an A level.”
Do you watch shows like the X Factor with your kids?
Bob Slater
“No. The missus does. I sort of watch it from around the corner, with one eye, pulling faces.”
Any memories of Nottingham? Didn’t you record here once at the Square Centre?
Steve McGill
“I don’t think I ever recorded in Nottingham. We’ve had drugs parties in Nottingham in the past, certainly.”
Do you remember doing Most Haunted at Wollaton Hall?
Mike Greenwell
“Yeah we did that about three years ago but they held that back two years before they showed it. We decided to go with the flow. They pay you enough, you believe in ghosts don’t you? Do I really believe in ghosts? Give over. But we put on good show and we had a laugh doing it.”
Do you think you’d make a good Prime Minister?
Kate England
“No, no, no, no. I’d get impatient and make a few irrational decisions.”
Your lyrics are amazing - have you ever written poetry? Do you consider yourself a street poet like Mike Skinner) of The Streets) does?
Nicola Monaghan
“My songs are sort of poetry aren’t they? Street poet? I dunno, I suppose so, a street observer come poet. I’ll go with that. I’m old enough to be Mike Skinner’s dad though.”
Do you always lose your socks in the washing?
Kate England
“Err, yeah. Do I do my own washing? Do I f... do I ‘eck. I’ve got lots of socks. When you get to my age that’s all your get (as presents), socks and underpants. But they always go missing.”
Penguins or Wagon Wheels?
Joel Wainwright
“Wagon Wheels. But I’ve got them both in the fridge at the moment. The kids are on ‘em as well as me.”
What is your favourite shampoo?
Katie Taylor
“If I ever have to buy shampoo it’d probably be that one from Vidal or whatever. I don’t know really, I leave that up to the missus, to do all that stuff.”
When were you happiest?
Kate England
“I’ve had a pretty all right life. From being a 15-year-old messenger boy at the Post Office. I’m really happy now. It comes with growing up doesn’t it? You fit in your shoes a bit better. My home life is fantastic. Just as we thought all the kids had gone my missus had two new arrivals. So we’ve got a two year old and a one year old. It’s brilliant. Am I a good dad? I’m a brilliant dad.”
Gig
Who: The Charlatans, Shaun Ryder
Where: Rock City
When: Tuesday October 12
Tickets: £23.50, 0871 310 0000
Web: gigsandtours.com
Posted by Simon Wilson at 09:59