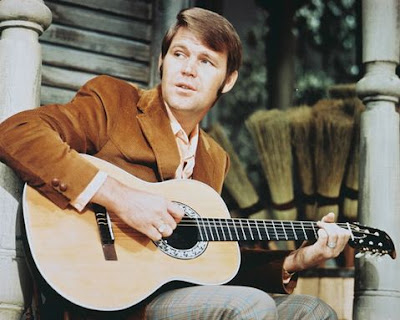 WELL, Jonathan Ross struggled to get a cohesive story out of him on his Radio 2 show last weekend. And given that Glen Campbell is 72 years old, spent a good decade or two caning the booze and coke and it's nine in the morning when we speak, I shouldn't have been surprised to have had a mostly one-sided conversation.
Which is a shame because there are so many stories in that head of his. Not just of his own past hedonism but working with Elvis, Sinatra, Phil Spector, The Beach Boys, even John Wayne, who he appeared alongside in the classic Western True Grit.
Oh yes, there is a great deal more to Glen Campbell than the Rhinestone Cowboy/Wichita Lineman/Gentle On My Mind country hitmaker.
Indeed with Meet Glen Campbell, his first new studio album in nearly two decades, he's showing another side of himself, covering songs by the likes of U2, Foo Fighters, the Velvet Underground, Green Day and Travis.
It's had rave reviews all over and is attracting a few younger faces to his shows.
"I noticed last night there were a lot of young people in the audience," he says from his hotel room in Glasgow.
Was he surprised by the album's success?
"Well, err, no I'm not surprised because when we were through with it I was very pleased with the outcome,
"I guess, I had no expectations."
There's an obvious comparison with the four albums Johnny Cash made with Rick Rubin under the American Recordings banner. So has he more planned?
"Probably will yeah. We haven't got anything in the works right now but I'm sure we will."
Particularly as he recorded "a hundred" covers for this album.
Had he heard of Travis before making the album?
"Yes I had. I had heard of all of them but I wasn't familiar with some of their music. It was a heck of an experience."
I'm struggling, so try for an Elvis story before wrapping it up. 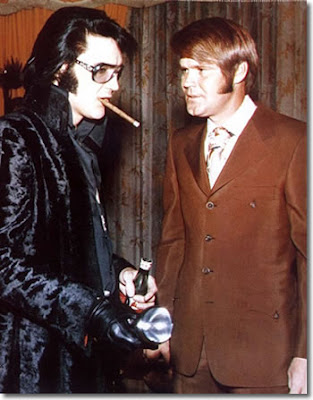 "We both had a contract for the Las Vegas Hilton. We'd stay over a day and roar with each other. Elvis was an incredible entertainer. People don't realise what a good singer he was."
(Surely they do).
Did he ever record with The King?
"I played on the Viva Las Vegas soundtrack."
Other notable recordings you can hear Campbell on include The Beach Boys' Pet Sounds and Frank Sinatra's Strangers In The Night. Campbell, prior to his solo success in the seventies, was a much sought-after session guitarist. Much of that was down to, he says, a technique of using a capo – a guitar accessory.
"You get that good open ringing sound in any key. It got me a lot of sessions. When I was a kid I couldn't (press) the strings down on the guitar that daddy had bought for seven dollars or something like that. So daddy just put a rubber band and sticks to hold the strings down." 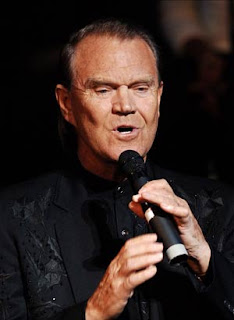 To fill the void left when he quit the drugs and alcohol 18 years ago, Campbell, whom lives with his fourth wife in Malibu, plays golf. Sometimes with other music veterans, like Andy Williams and Alice Cooper.
"I'd say Alice was the best. He's had more time to do it," he laughs.
So will he be having a round while over in the UK?
One imagine he turns to look at the drizzle through his hotel window.
"If it keeps going like this I won't."

Glen Campbell appears at the Royal Concert on Friday October 17
Posted by Simon Wilson at 06:46