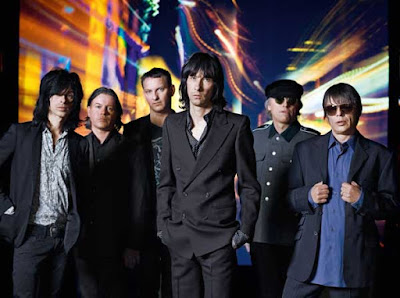 As a member of Primal Scream, a band noted for its toxic adventures, you wouldn't expect him to be doing something so, well, normal.
"I'm on a bit of a mission today," says Barry Cadogan, from a park in Islington.
"I've got to find a birthday present for my mum."
He adds with a laugh: "That's the real rock n roll lifestyle."
Mum is back in Beeston, where Cadogan grew up. He legged it to London to pursue his desire to play the guitar for a living and has since worked with Morrissey, Paul Weller, Edwyn Collins, St Etienne, Spiritualized, the Chemical Brothers and since 2006, Primal Scream.
"If I'm around and they need me they give me a call," says Cadogan, who also played guitar on the band's latest album Beautiful Future. Which is quite a jolly collection for them.
Are Bobby Gillespie and co. the rock n roll hedonists we are led to believe?
"I think they've all calmed down a lot. They're just focused on making records."
He juggles Scream duties with his own blues rock trio Little Barrie, who have thus far released two albums: We Are Little Barrie and Stand Your Ground.
"It's good to do both things.
I want to have my cake and eat it I suppose. With Primal Scream there are twice as many members so it's a different environment. Being part of the band and not fronting it is refreshing as well. And seeing them creating music is really inspiring."
It's because of the Scream tour, which started last weekend, that Little Barrie won't be supporting Paul Weller at the Trent FM Arena tomorrow.
"We just came off tour supporting him. And we did a song with him on his last album, the (title) track 22 Dreams. It's done really well.
"We've known Paul for quite a long time. I first met him seven years ago in London. We did some gigs with him in 2002. We did bump in to him occasionally, then I saw him at some festivals with Scream and we kept in touch."
He adds: "He seems really rejuvenated at the minute. He's never let himself get comfortable or lazy. He's still got the enthusiasm for it. It's exciting to see, it's like seeing someone who is 18. Same with Primal Scream, they've still got the hunger for it."
They'll be at Rock City next week on the NME Rock N Roll Riot Tour.
"Rock City was where I first saw them play. In 1994 I think. I was messing around in bands with friends at the time. Those guys are in the Soundcarriers now who are a great band."
Are they impressed by the names you've been working with since the move to London?
"I'm not the sort of person who would walk in to The Bell in the Market Square and go 'I was with so and so the other day...' I'm not really in to that."
And what about mum and dad?
"They've always been supportive and encouraged me. Although I'm sure there are times when they might have hoped I'd got a proper job. My dad was a fan of the Jam anyway. He was also a Smiths fan so when I worked with Morrissey... I did ten shows over two months in 2004."
Were you nervous meeting the likes of him and Weller?
"There's always that saying isn't there, don't meet your heroes. But most have been pretty cool. You do feel quite nervous meeting some of them.
"We got to play with Hubert Sumlin in New York about three years ago. He was the guitarist with Howlin' Wolf from the 50s to the 70s and meeting him was mind blowing. Those guys were probably the high point of electric guitar playing and innovation. Just telling stories about the way he lived his life and touring with Wolf and Muddy Waters.
"And meeting Ian Brown was a big thing for me. And playing with Mani (in Primal Scream) because the Stone Roses were such a big influence on me. It was the Stones Roses and seeing Chuck Berry on TV, they were the two things really..."
Has he met Chuck?
"No but I saw him at the 100 Club. He did a one-off show and you can only get 250 people in there. I went down with the guys from the Scream. That was incredible.
"He's got his head screwed on. He still gets paid before he goes on stage. That's his thing, no dough no show. Sometimes he'll go on with the money in his shirt pocket. And for 81 he looks incredible."
Not a bad job all in all then?
"It's not the easiest way to make a living and it's getting harder but I've done some amazing gigs.
"The hard work has paid off in some respects."
And with that he's out of the park and back to finding a gift for his mum.
"Living the dream," he laughs, "living the dream..."